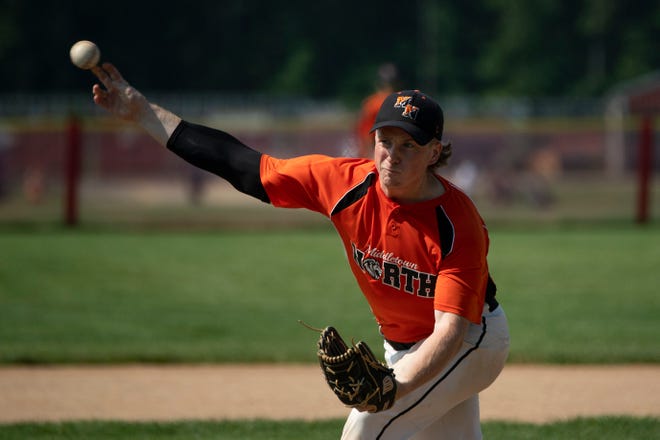 FRANKLINVILLE – Middletown North has never won an NJSIAA group baseball championship and hasn’t been to a group final since 1983.

But on Saturday the Lions will get a chance to make history.

It was all made possible by a solid 6-1 victory over Delsea in a South Group 3 semifinal Monday, as the Lions, with one of the most remarkable turnarounds in recent memory, won their 11th straight, while ending Delsea’s 15-game winning streak.

Now Middletown North (20-10), which had a sub-.500 record on May 11 and failed to qualify for the Shore Conference Tournament, will take on Cranford, a 12-1 winner over Ramapo in the other semifinal, in Saturday’s final, set for 10 a.m. at Dob DeMeo Field at Veteran’s Park in Hamilton Township.

Leading the way was fifth-year senior Colin Dowlen, who threw a complete game and drove in three runs at the plate. Dowlen, a Seton Hall commit, gave up six hits and struck out four, reaching the 110 pitch threshold on his final batter of the day.

“We totally turned it around from the beginning of the season,” said Dowlen. “We just got hot and just keep rolling and everyone in the lineup is contributing. Just a team effort.”

Dowlen will be available to start in Saturday’s Group 3 championship game, although Middletown North coach Ryan McCabe indicated the final decision will be made later this week.

“I’ve been around a lot of good guys and had the good fortune to coach a lot of good guys,” McCabe said, “and Colin is right there with every single one of them – as many of these guys as I’ve seen and everything they’ve done I would put Colin up there against anybody I’ve ever seen.”

Dowlen is taking advantage of the bridge year granted all spring athletes from the 2021 and 2022 classes, allowing him to take classes at Brookdale Community College while playing one final season of high school baseball due to the impact of the COVID-19 pandemic.

“I think it was a great decision to come back, it worked out,” he said. “Now just just keep the bats going and play solid defense.”
Fourth inning outburst
The game turned in the fourth inning when the Lions sent 10 batters to the plate, scoring five times to build a 6-0 lead. Middletown North has now outscored their opponents by a 126-25 margin over the past 11 games. “One through nine we’re a tough lineup,” McCabe said. “It was the third and fourth innings when we did our damage, but we had a lot of soft innings in there where we don’t typically strikeout.”

The Crusaders, who finish the season at 23-6, got a single run in the fifth inning, but never seriously threatened after that.

While Dowlen got through the first two innings by stranding a runner at second base each time, Middletown North was unable to get to Delsea starter Jake Watson. But Watson was pulled for sophomore George Starr to start the third inning, and Middletown North immediately scored on a run on Dowlen’s RBI single, with the Lions leaving two runners on base.

In the fourth, a Dylan Briggs double scored the first run, later scoring on a throwing error. Dowlen then drove in a pair of runs with a bad hop single, before a Jason Quardt single made it 6-0.

As for Dowlen taking the mount against Cranford, McCabe said: “We’ll see how he feels. He was usually a six-day kind of guy, meaning he gets five days off. I know he’s going to want to but we’re got to be smart and do what’s best for him and everyone long term.”